My first mistake was thinking I could save money on tools, and pay the bit extra to purchase the already flared lengths from Raw. I trashed those on my first attempt, which left me having to buy more pipe AND the tools, which I should have done in the first place.

Having read of others’ woes when flaring brake pipes, and having read the timely review in CKC magazine, I purchased a Sealey PFT08 Flaring Tool. I also bought an Oakes 111 Brake Pipe bending tool after reading a later review in CKC. Neither were cheap, but nor did I pay full RRP as I bought from eBay, and I do try to ‘buy well, buy once’, especially when it comes to tools. 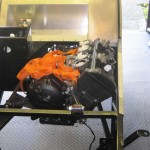 Even though I had good tools, it did not make the job as simple as I first thought it would be. I tackled the front of the car first, and it was one particular bend in the master cylinder to front T-piece that nearly reduced me to tool throwing fits of rage. The bends from the brake master cylinder, down and round the pedal box and on to the upper chassis rail went reasonably well, but getting the bend under the horizontal chassis rail both in the right place, and the right size, proved almost impossible.

I could have taken the easier route of going along the top of the chassis rail, but I didn’t really want to do this because I was worried about accidentally crushing the pipe in the future.

After lots of failed attempts, I walked out the garage because I had run out of pipe, and run out of patience. Unfortunately, as mentioned in this post, I did not make it back into the garage for nearly two months. 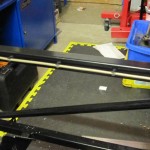 Front T-piece to near side brake pipe bent, flared, and secured in place with knock-on pipe clips

When I finally did, I took a slightly different approach, and went from the T-piece back to the master cylinder, allowing me to tackle the problem bend first, and hey presto, got it done on my second attempt! The other two front pipes were simple by comparison, and by the end of the day I had all three front pipes bent and flared correctly, the front T-Piece bolted to the front chassis rail, and knock-pipe clips (my preferred pipe securing technique) in place every 100mm on the chassis. I still need to secure the pipe around the pedal box area, but I will do this when I have vinyl-ed and permanently attached the scuttle.