This weekend I tackled a couple of the jobs that I have been putting off. 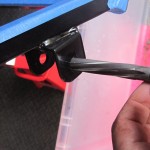 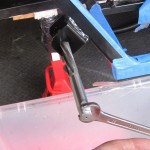 Firstly, I enlarged the suspension and engine mount brackets from 12mm to 1/2″. This was done because all the engine mount and wishbone bushes were 1/2″ ID, but the brackets and bolts supplied by Raw were 12mm. Therefore there was slight play between the bushes and bolt, which I felt would lead to inaccuracy when setting up the suspension. Debate rages on the Internet about this, especially over on locostbuilders.co.uk, and it seems to be an issue for a lot of kits, not just those supplied by Raw. After speaking to Andy Bates of AB Performance, who sets these cars up for racing, and Matt of Procomp suspension, I decided to make the modification. 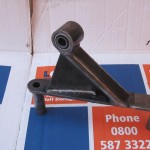 After finding out that a drill does not actually drill a perfectly round hole, I purchased a 1/2″ hand reamer bit from eBay, and set about the brackets. I quickly realised that space was at a premium, and I could not get a T-Bar, let alone a drill, in place to carry out the reaming. I had to do the car by hand, using a spanner to turn the reamer. After several hours, and lots of WD40, the job was done. 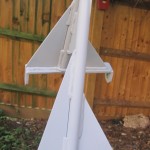 The other job I tackled was the engine mounts. These need painting before they are used, and so I made good use of the sunny weather to get out and get them started. After wire brushing the surface rust off, I de-greased the mounts thoroughly with Gunk, and let them dry.

Several light coats of etch primer were applied, and the mounts left to hang and dry, ready for the primer and colour coats to be added next weekend.