I installed the sump baffle plate and clutch springs before starting this blog, but I thought I would post it up now in case the details are of use to anyone.

Previously, I had stripped the engine of the loom, and the coolant plumbing. I had also removed the AIS system, and the throttle bodies.

I started by removing the clutch cover, and then removed the clutch spring bolts and springs themselves. It was a simple job to put the new springs and bolts in, and I torqued them up to the correct value, finally adding a dab of torque seal to each bolt to show that I had indeed checked the torque. This is something I intend to do throughout the build, hopefully demonstrating to the IVA examiner that I have applied thought and care during the build process. The clutch cover was then replaced, taking care to make sure the lever was in the right place. 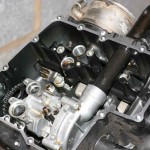 Flushed with my success I moved onto installing the sump baffle plate. After removing the oil temperature sender, I flipped the engine over on the bench and removed the sump. I then removed the oil pressure relief valve, oil strainer, oil drain pipe, and U-shaped oil pipe. The sump baffle was then positioned, and the parts replaced, with new O-rings used where necessary. This was where I made my first mistake – I dropped one of the bolts and it fell into the gear box – disaster! I walked away from the garage for 1 hour while I thought about how I was going to resolve the situation, and spent another hour with a powerful lamp and a magnet on a stick poking around in the crankcase and gearbox, before I managed to retrieve the lost bolt and breathed a large sigh of relief. 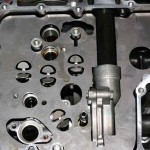 I then started to replace the sump, using a new gasket, but quickly realised that the oil level indicator sender was fouling the baffle plate. This was something that Andy at AB Performance had warned me would happen, so I proceeded by trimming several of the ‘legs’ of the cage so that the sump fitted properly. I did this and not remove the sender altogether so that I did not need to worry about a blanking plate. I bolted the sump back on, taking care to use thread lock where necessary, and ensuring that I used a cross-cross tightening pattern. Torque seal was again applied after torquing the bolts up to their correct values, and I flipped the engine back over, before retiring from the garage for the day.