I carried out these changes before starting this blog, but I thought I would post it up now in case the details are of use to anyone.

I take no credit for this modification, that all goes to the builders on the Locost Builders forum, and in particular the participants on this thread 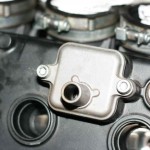 I started by removing the pair of AIS covers from the cam shaft cover which exposed the reed valves. 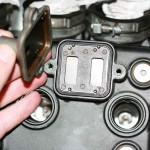 These where easily removed using a flat head screwdriver, followed by the metal cages underneath. 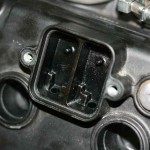 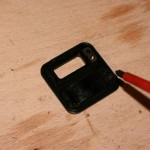 The reed valves themselves were simply removed from their metal retainer plate using a small cross head screwdriver. The plates were then put to one side.

I then removed the cam shaft cover, taking care not to damage the rubber gasket. After measuring the hole I calculated that the nearest tap would be an M7, but grub screws in that size are hard to find, so I decided to drill the holes out to 6.8mm and tap them to M8. 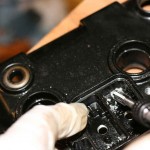 Whilst I had the drill in the stand, I drilled the new holes to allow the breathing. 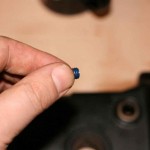 The cam shaft cover was rigorously cleaned before I threaded 4 8mm M8 grub screws into the newly tapped holes, using thread lock to make sure they do not go anywhere. 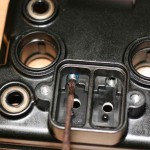 The cleaning included running a tap into the existing threads to remove any old lock compound, and a die around the bolts to do the same. 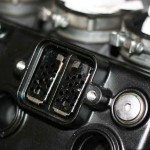 The metal cages were replaced, followed by the reed valve plates, and finally the AIS covers. I am thinking about putting some fine stainless gauze under the cages to help oil condense and run back into the engine, but I can easily do this at a later date if I find too much oil in the catch tank. 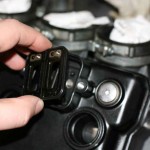 I replaced the cam shaft cover, using the existing rubber gasket and some liquid gasket sealant in the four semi circle indents in the engine. Finally the cam shaft cover bolts were inserted with some lock compound, and then were torqued to the correct specification, and a dab of torque sealant applied to each. 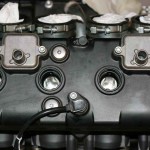